Documentation:  Forward Flexion, External rotation with arm at side, Internal rotation by hand up spine (Glut-T4).  Document both active and passive.

Deltoid-elevates head of the humerus and abducts the shoulder

60)Adhesive capsulitis (“frozen shoulder”) and true glenohumeral arthritis are often preceded by a history of non-adhesive capsulitissymptoms, are characterised by deep joint pain, and restrictactivities such as putting on a jacket (impaired external rotation).Adhesive capsulitis is more common in people with diabetes andmay also occur after prolonged immobilisation. On examinationglobal pain is present, along with restriction of all movements,both active and passive.

Referred mechanical neck pain (common) Typically there is pain and tenderness of the lower neck and suprascapular area, referred to the shoulder and upper limb area; shoulder movement may be restricted. Movement of the cervicalspine and shoulder may reproduce more generalised upper back,neck, and shoulder pain. Upper limb paraesthesia may occur.18 Treatment is with relative rest and analgesia, and return tonormal activities should be encouraged. Physiotherapy may behelpful.

stress test by bringing elbow to opposite shoulder and then palpating

1st degree-sprain, pain but no subluxation

rays with 15 lb weight suspended at wrist(not in hand).  AP film with

separation if distal clavicle by not more than half its diameter.

clavicle.  greater than 1/2 cm between coracoid aqnd clavicle or inf

border of clavicle is above ac joint.

 Type I (a): Ligamentous strainno deformity, but tenderness of AC joint

 Type II (b): Rupture of acromioclavicular ligamentcan have slight deformity on physical examination

 Type III (c): Rupture of both acromioclavicular and coricoclavicular ligamentsignificant deformity on physical examination, bottom of clavicle at or above top of acromion on x-ray

sprain of costaclav.  Figure of 8 and sling

roll shoulder backwards.  Posterior dislocations can cause pneumos, or

tracheal compression.  Reduce clavicle by (17-9A)

There are four types of anteroinferior shoulder dislocation, denoted by the final position of the humeral head. Subcoracoid dislocations constitute 70% of all dislocations.5,6 Subglenoid dislocations (Fig. 2) are the second most common, 30%.5 Subclavicular and intrathoracic dislocations are associated with fractures and violent forces.7 Luxatio erectae is regarded as a pure inferior dislocation and is not discussed here.

Can not internally rotate humerus, so to test if reduced, lift arm and

let fall on stomach, if it can fall, back in.

Fractures occur in about 30% of cases.9,10 The most common are: 1. Hill Sach’s lesion (Fig. 3), seen in 5476% of cases, is a compression fracture that results in the formation of a groove in the posterolateral aspect of the humeral head.2,911 Also known as a hatchet deformity it is best viewed with internal rotation of the arm.9 2. Fractures of the anterior rim of the glenoid fossa (Fig. 4) or Bankart’s lesion12,13 (a separation of capsule and/or labrum from the anteroinferior rim, the term is often used to refer to bony disruption).2,10 It is the result of impaction of the humeral head against the anteroinferior glenoid labrum, and is associated with rupture of joint capsule and IGHL damage. It is more common in younger patients and has a strong association with recurrent dislocations (8587%).2,13,14 3. Avulsion fracture of the greater tuberosity (Fig. 5) is seen in 1016% of cases.5,9,10,15,16 4. Uncommonly, the coracoid process can be damaged by the humeral head resulting in painful non-union. 5. Humeral shaft fracture is rare, associated with significant forces.

just enough to have only shoulder over plate.

Also can see Bankart’s fracture, a fracture of the anterior glenoid.  This injury needs ortho consult and probably CT scan of the shoulder.

Rx-Scapular manipulation or Hennipen (externally rotate then abduct, if not successful, slowly adduct and internally rotate) (elderly Hennipen or stimson)

arm to 90 degrees, stopping for a minute when painful.  After reaching

90 degrees, if not in, slowly elevate arm  and then lift humerus into

of weight.  After 20-30 min, if still not in, internally and externally

lateral.  can be combined with stimson or Hennepin.

1 Inform the patient of the procedure and the fact that it will be painless. It is important to relax the patient and confident reassurance is the first step towards this. 2 Sit the patient up with the back vertical. This can be done on a bed, chair or trolley, but preferably seated on a non-wheeled chair without arm rests. 3 Carefully support the arm while it is moved into the correct position, allowing the patient to help with the other arm. The correct position is with the arm adducted (next to the body) and pointing vertically down, the elbow is flexed at 90 degrees so that the forearm points horizontally and anteriorly. 4 The operator then squats /kneels to the side of the patient and facing the opposite direction to the patient. The operator then slips the hand between the patients forearm and body so that the patients wrist / hand is resting on the operators upper arm. *Do not make pulling movements at any time as this will elicit pain and result in spasm.* 5 Apply steady, very gentle traction (the weight of the operators forearm is quite enough) directly downwards once the patient is settled and pain free. Keep this gentle weight on the arm throughout, stop if any spasm or pain. Usually resting with the patients arm in this position will start to reduce the pain of spasm. 6 With the other hand, the operator then massages the trapezius, deltoid and biceps muscle sequentially, repeating this process and concentrating on the biceps brachii until the muscles are fully relaxed. A strong kneading of the biceps with the thumb anterior and the four fingers of the operator posterior to the arm is recommended. At this point the humeral head will relocate usually without any clear indication that the shoulder has reduced (no sound or clunk feeling). This means that the shoulder must be observed/checked regularly to confirm when relocation has occurred (with shoulder exposed movement can be seen as the step disappears.)

Spaso technique:  Place the patient in prone position and grasp the wrist and elevate the limb until it is vertical, then gently externally rotate the limb.  Nudge the head back into the fossa.

Indications for surgery-possibly for glenoid rim fx or greater

Treatment after reduction-sling and swath for 3 weeks.

This can be accomplished with a sling and swath or a commercially available shoulder immobilizer. The duration of immobilization differs among different patient groups. Younger patients should be instructed to follow up within 1-2 weeks, and immobilization generally is maintained for approximately 3-4 weeks. Older patients will be immobilized for a considerably shorter period and should be instructed to follow up within 5-7 days to allow for early mobilization.

other nerve injury, fx of humeral head of glenoid lip.

29% had fracture, 76% of these were hill sachs.  All of these fractures were successfully reduced in the ED.

Do we need prereduction films, probably not (Shuster, M., et al, Am J Emerg Med 17(17):653, November 1999 and Can J Emerg Med 4(4):257, July 2002)  One argument against is a two part proximal humeral fracture.  In this injury, dislocation of the humeral head can cause avascular necrosis of the head.

Younger patients should be immobilized for about 3 weeks.  Those > age 60 should have early follow-up (5-7 days) to allow for early immobilization to avoid joint stiffness (Roberts: Clinical Procedures in Emergency Medicine, ed. 4, pg. 957)

Immobilization in external rotation after shoulder dislocation reduces the risk of recurrence. A randomized controlled trial. 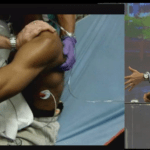 Arm is held in adduction and internal rotation, can not abduct.

Pt presents with arm in the asking a question position.

Yerguson’s test with flexed elbow, have pt supinate against resistance, pain is positive

Reduce by pulling both shoulders backwars.  Fracture can injure subclavian as well as CN IV-VIII.

May need CT Chest for Pneumo and pulm. Injuries

Get axillary view of shoulder

as manifested by lateral displacement of the scapula and acromioclavicular separation, is a previously unreported injury in which there is a complete disruption of the scapulothoracic articulation without an overlying partial or complete amputation through the soft tissue. Associated with the disruption of the scapulothoracic articulation are injuries to the brachial plexus and the subclavian artery and vein; multiple open and closed fractures of the ipsilateral upper extremity are often present also. In the patient with severe multiple injuries, scapulothoracic dissociation may not be recognized immediately, with potentially fatal consequences. In this paper we present the cases of three patients with radiographic and pathological evidence of scapulothoracic dissociation and review the literature on related injuries.

assitant pushes down on oppsoite shoulder

abduct arm straight out to 90

internally rotate and adduct arm so it crosses the patients chest

Self Reduction of a Shoulder

This condition is “Brachial neuritis” or “Parsonage-Turner syndrome” an acute idiopathic neuropathy with predominantly motor rather than sensory findings. It presents initially with severe pain in the shoulder followed by weakness affecting various branches of the brachial plexus, with the upper trunk most commonly affected. (anatomy reminder) The condition can be bilateral, and 80% of patients will recover function although this may take two years.

I hadn’t heard of this condition before and a search of the standard EM texts wasn’t so helpful with only Tintinalli including it. I suspect this might be because many of these patients would be referred direct to neurologists rather than ED. I’ve posted this case mainly to share my illumination of something completely new, particularly given the puzzling nature of the presentation (use of dogma no. 3 didn’t help me this time)  And the supraspinatus tear? Just an incidental finding that succeeded in throwing us off the scent!