AHA Guidelines for the management of spontaneous Intracerebral hemorrhage

Added may consider PCC, but no clinical benefit demonstrated over FFP (IIa;B)

Acute lowering of BP to SBP of 140 is probably safe (IIA;B) 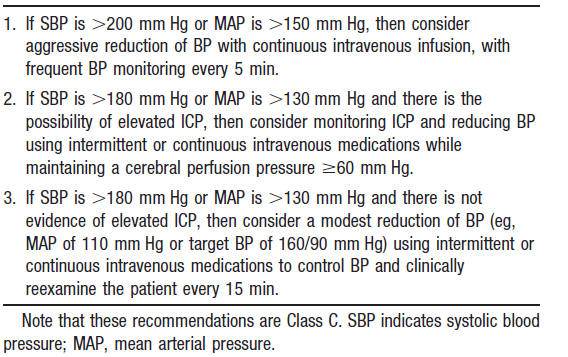 Patients should be admitted to ICU (I;B)Avoid Hypoglycemia, tight glucose control not recommended (I;C)Prophylactic Anticonvulsants should not be used (B)Consider ICP monitoring if GCS <9, sig. IVH, hydrocephalus,  or herniationMaintain CPP 50-70 and ICP < 20 (IIb;C)Intraventric admin of tpa for IVH is considered investigational (IIb;B)Cerebellar hemorrhage with poor mental status or hydrocephalus need surgery (I;B)Consier crani in patients with lobar clots > 30 ml within 1 cm of surface (IIb;B)Withhold making decision to withdraw agressive care until 2nd full hospital day (IIa;B)—Bleed location in hypertensive bleeds (in order of prevalence)Basal GangliaThalamusPonsCerebellarconsider angio in young patients or ones with vascular abnormalities, perisylvan bleeds, abnormal calcification BP MAP 70-130 (110 immediately post-op or in patients with no preexisting hypertension)   seizure proph only if increased icp or seizure   pts with GCS < or = to 4 without cerebellar compression are not recommended for surgery   —————————————————-  Early growth of hemorrhage and outcome (Stroke 1997;28:1-5) 1/4 of the hemorrhages grew substantially on 1 hr repeat CT it is often associated with neurologic deterioration  ————————————————– ICH Grading Score (Stroke 2001;32:891) in previous studies only 1 in 35 of pts with GCS 3 or 4 survived to 30 days   ———————————————————– European guidelines (Cerebrovasc Dis 2006;22:294) ———————————————————- Surgical vs conservative treatment for ICH: STICH  (Lancet 2005;365:357) ——————————————————

Stroke. 1997 Jan;28(1):1-5. Links Early hemorrhage growth in patients with intracerebral hemorrhage.Brott T, Broderick J, Kothari R, Barsan W, Tomsick T, Sauerbeck L, Spilker J, Duldner J, Khoury J. University of Cincinnati Medical Center, Department of Neurology, OH 45267-0525, USA. BACKGROUND AND PURPOSE: The goal of the present study was to prospectively determine how frequently early growth of intracerebral hemorrhage occurs and whether this early growth is related to early neurological deterioration. METHODS: We performed a prospective observational study of patients with intracerebral hemorrhage within 3 hours of onset. Patients had a neurological evaluation and CT scan performed at baseline, 1 hour after baseline, and 20 hours after baseline. RESULTS: Substantial growth in the volume of parenchymal hemorrhage occurred in 26% of the 103 study patients between the baseline and 1-hour CT scans. An additional 12% of patients had substantial growth between the 1- and 20-hour CT scans. Hemorrhage growth between the baseline and 1-hour CT scans was significantly associated with clinical deterioration, as measured by the change between the baseline and 1-hour Glasgow Coma Scale and National Institutes of Health Stroke Scale scores. No baseline clinical or CT prediction of hemorrhage growth was identified. CONCLUSIONS: Substantial early hemorrhage growth in patients with intracerebral hemorrhage is common and is associated with neurological deterioration. Randomized treatment trials are needed to determine whether this early natural history of ongoing bleeding and frequent neurological deterioration can be improved.

Abstract Introduction  Primary intraventricular hemorrhage (IVH), bleeding in the ventricular system without a discernable parenchymal component, is a rare neurological disorder. To better define the features of primary IVH and the yield of diagnostic angiography in this condition, we retrospectively analyzed all cases of primary IVH evaluated at a tertiary referral hospital over a 6-year period and performed a systematic review of the literature. Methods  For the retrospective case series, all patients with primary IVH admitted to the neurovascular service at a single tertiary referral center over a 6-year period were identified by screening a departmental database. For the systematic review of the literature, all case series of patients with primary IVH diagnosed by computed tomography were identified in the Medline database. Results  From the systematic review, the majority of patients with spontaneous primary IVH presented with headache (69%), nausea/vomiting (53%), and altered mental status (66%). Most primary IVH patients had associated hydrocephalus (62%), and about one-third required ventricular drainage (34%). Diagnostic cerebral angiography was positive for a bleeding source in 56%. The two most common causes identified by angiography were arteriovenous malformations (58% of positive angiograms) and aneurysms (36% of positive angiograms). Approximately one-third of patients with primary IVH do not survive hospital discharge (39%). Patient age and amount of IVH independently predicted in-hospital mortality. Conclusions  Primary IVH is a rare form of intracerebral hemorrhage, with varying short-term outcomes that depend on patient age and the extent of intraventricular hemorrhage. The yield of diagnostic cerebral angiography in the setting of primary IVH is very high. The two most common causes of primary IVH identified on angiography are arteriovenous malformations and aneurysms. Routine catheter angiography in the setting of primary IVH is warranted. Electronic supplementary material  The online version of this article (doi:10.1007/s12028-008-9070-2) contains supplementary material, which is available to authorized users.

Abstract Early Surgery Versus Initial Conservative Treatment in Patients With Spontaneous Supratentorial Intracerebral Haematomas in the International Surgical Trial in Intracerebral Haemorrhage (STICH): A Randomised Trial Available online 15 June 2006. Mendelow AD, for the STICH Investigators (Newcastle Gen Hosp, Newcastle upon Tyne, England; et al) Lancet. 2005;365:387-397 Background: Spontaneous supratentorial intracerebral haemorrhage accounts for 20% of all stroke-related sudden neurological deficits, has the highest morbidity and mortality of all stroke, and the role of surgery remains controversial. We undertook a prospective randomised trial to compare early surgery with initial conservative treatment for patients with intracerebral haemorrhage. Methods: A parallel-group trial design was used. Early surgery combined haematoma evacuation (within 24 h of randomisation) with medical treatment. Initial conservative treatment used medical treatment, although later evacuation was allowed if necessary. We used the eight-point Glasgow outcome scale obtained by postal questionnaires sent directly to patients at 6 months follow-up as the primary outcome measure. We divided the patients into good and poor prognosis groups on the basis of their clinical status at randomisation. For the good prognosis group, a favourable outcome was defined as good recovery or moderate disability on the Glasgow outcome scale. For the poor prognosis group, a favourable outcome also included the upper level of severe disability. Analysis was by intention to treat. Findings: 1033 patients from 83 centres in 27 countries were randomised to early surgery (503) or initial conservative treatment (530). At 6 months, 51 patients were lost to follow-up, and 17 were alive with unknown status. Of 468 patients randomised to early surgery, 122 (26%) had a favourable outcome compared with 118 (24%) of 496 randomised to initial conservative treatment (odds ratio 0.89 [95% CI 0.66-n-1.19], p=0.414); absolute benefit 2.3% (−3.2 to 7.7), relative benefit 10% (−13 to 33). Interpretation: Patients with spontaneous supratentorial intracerebral haemorrhage in neurosurgical units show no overall benefit from early surgery when compared with initial conservative treatment.

No benefit to early surgical intervention

I believe this is Tom Bleck

Regarding treatments to stabilize the patient in order to get to the OR (or theatre for some of you, or operating department for people who object to the term room), this is one of the few circumstances in which more than modest hyperventilation is reasonable in the setting of ischemia; I might even hyperventilate more than David suggests, into the low to mid 20s for a brief period in order to get the patient to the OR.  Regarding the mannitol dose, no one knows this either, but I’d probably start with 1 gm/kg on the theory that I want a high osmotic gradient and am not worried about rebound since the surgeon will make room for more swelling later.  In recent years I have used a lot more hypertonic saline, but I realize that the literature is mixed in this regard; this would be a circumstance in which 30 – 60 mL of 23.4% saline (sodium quadrate in pharmacy parlance) over 10 min might be best because it seems to work most quickly.  Coplin, what do you think as the holder of the IND for salt?  Raise the head of the bed and give neuromuscular junction blockade so there is no coughing (boy am I old-fashioned!); there’s no point in ‘following the exam’ any longer.  Turn the FiO2 up to 1.0 try to get some oxygen in without having to raise the blood pressure pharmacologically, although it is probably going up pretty high on its own (and if it isn’t, or is falling, the game is probably over already).  Although there is no question that lowering core temperature lowers ICP, there isn’t time to do it here; the patient needs to be decompressed before any modality would work.  I suppose I might start running in some chilled saline, which we keep around for post-cardiac arrest hypothermia, on the way to the OR, but I wouldn’t do anything that would delay transit.

I think the real question is whether to put in an external ventricular drain while the OR is being prepared.  There is likely to be obstructive hydrocephalus here, and one might lower the ICP substantially by relieving it.  The downside of this is the risk of upward herniation, which I have seen enough times to believe in and fear.  Some folks will put one in prophylactically and clamp it to have it in place already when the patient’s exam deteriorates.  If one does place an EVD, it shouldn’t be allowed to drain to atmospheric pressure; just take off a small amount of fluid.  Since in the emergent situation the fluid will initially gush out, this is another argument for placing it before the patient is trying to die.

Reversal of Antiocogaulation and Antiplatelet Drugs

Lysis for Intraventricular Blood after sICH

Who needs an MRI

Don’t need imaging if none of the following:

INTERACT2 was an open, blinded endpoint, randomized controlled trial in 2,839 patients with ICH within 6 hours of onset and elevated systolic BP (SBP) (150-220 mm Hg) who were allocated to receive intensive (target SBP <140 mm Hg within 1 hour, with lower limit of 130 mm Hg for treatment cessation) or guideline-recommended (target SBP <180 mm Hg) BP-lowering treatment. Outcome was physical function across all 7 levels of the modified Rankin Scale at 90 days.

Analysis of the randomized comparisons showed that intensive BP lowering produced comparable benefits on physical function at 90 days in 5 subgroups defined by baseline SBP of <160, 160-169, 170-179, 180-189, and ≥190 mm Hg (p homogeneity = 0.790). Analyses of achieved BP showed linear increases in the risk of physical dysfunction for achieved SBP above 130 mm Hg for both hyperacute (1-24 hours) and acute (2-7 days) phases while modest increases were also observed for achieved SBP below 130 mm Hg.

This study provides Class I evidence that the effect of intensive BP lowering on physical function is not influenced by baseline BP.

EVD Placed in the Posterior Fossa

keep no lower than 20cm to avoid upward herniation