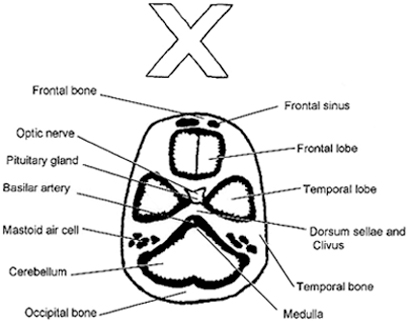 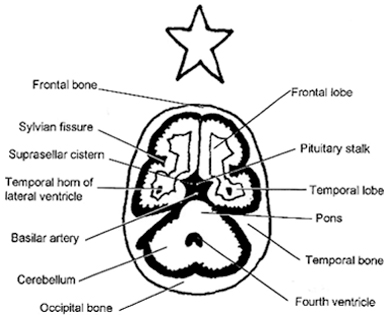 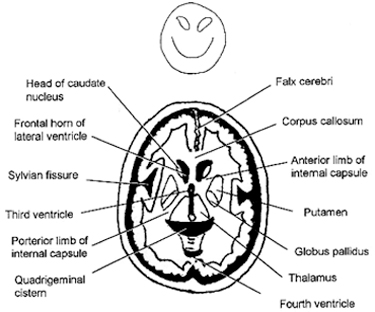 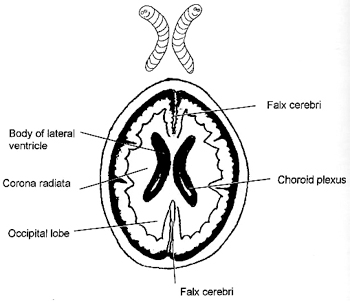 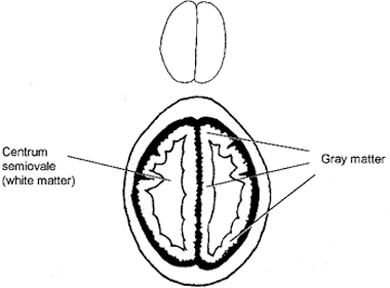 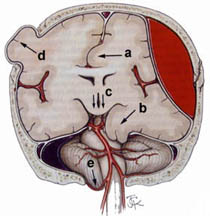 beam hardening artifact in cerebellum do to surrounding bone

can see blood in temporal tips

Mastoid Air cells towards back

ethmoid sinus on one cut up

see 4th ventricle and cistern forward of it, this is the circummesencephalic because it is around the midbrain=signet ring

the star mans arms reach for the sylvian cisterns

legs dangle down over the midbrain

can see clinoids sticking up into starman

first cistern to get compressed

TEMPORAL TIPS BLOW UP FIRST IN HYDROCEPHALUS, on same cut as suprasellar

tentorium blood layers out in SAH

falx is what you look at for shift

subdurals can layer out over tentorium

intraparenchymal bleeds can rupture into the ventricles, then they get hydrocephalus

day 3 is the worst day for bleeds blossoming

grey/white differentiation is early stroke, grey (which looks white on ct) takes on water and starts to look grey (which is how white matter looks)

no gross blood, cisterns are black and open, brain is symmetric with normal density, the skull and sinuses are normal, there is no evidence of hydrocephalus, no emergent dx noted on CT scan

1 in 5 get acute hydrocephalus from SAH

Describe it as open (all three limbs open), partially closed (one or two limbs obliterated), or completely closed

Measure for midline shift at the foramen of monro.

measure B to the septum pellucidum